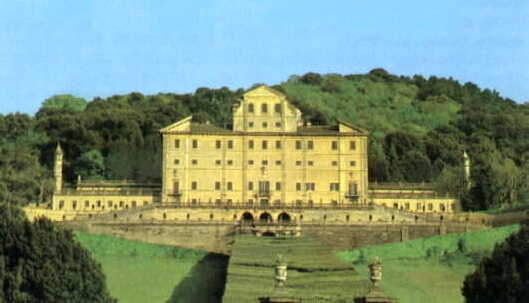 The first record of the Villa Aldobrandini date back to the 16th century when the villa was purchased by the Aldobrandini family. Prior to this it had been owned by a succession of minor Roman and provincial noblemen.
At the end of the 18th century it passed into the hands of the Borghese family, who had in the meantime also inherited all the Aldobrandini possessions.

Several architects and artists contributed to the Renaissance-Baroque-style design of the villa, but its chief author was Giacomo della Porta. The main building, which blends artistically with the profile of the hill at the back, was completed around 1603. The same year, work was started on the Italian garden, laid out in terraces and water gardens, by the fountain-designer and engineer Orazio Olivieri of Tivoli.

Inside the villa, the first floor is decorated with frescoes by Amnesio de Barna and Cavalier d'Arpino. Here also, is the famous bronze bust of Pope Clement VII, one of the Aldobrandinis. The chapel, dedicated to St. Sebastian, was frescoed in recent times by Giovanni Piancastelli from Bologna. The second floor comprises a series of sumptuously furnished rooms.

Between the villa and the hill at the back is the Teatro delle Acque, so called after the statues in the hemicycles of niches, which used to spout water and play flutes on command by means of a special hydraulic system designed by Giovanni Guglielmi.

The allegories depicted in the villa and garden generally refer to the Aldobrandini family: Atlas bearing the World in the central niche of the Teatro delle Acque alludes to Pope Clement VII; and the statue of Hercules about to help him, to Pietro Aldobrandini. The Hesperidian nymphs recall that mythological and paradisiacal garden and, through transposition, the enchantments of the Aldobrandini gardens. In the Stanza di Apollo, the Frascati hills are compared with Parnassus, the sacred mountain of the Muses, and Apollo with Cardinal Aldobrandini.


Back to General Informations

This page is courtesy of PIC98